Connecting the story of Easter to your neighborhood

The story of the arrest, trial, and execution of Jesus took place in Jerusalem 2000 years and thousands of miles from the streets that most of us walk.  Sometimes this reality can become a barrier to being able to grasp how much this one week in history has impacted the entirety of the future of humanity.  Purposefully walking the familiarity of your streets can bring the events of what we refer to as “the passion week of Jesus”to life in new and refreshing ways. We have mapped out a route ahead of time with 14 places to stop and reflect on each station.  You are also free to just begin walking and stop where you feel led to stop.  As you begin this journey, may God’s Spirit open your eyes in new and restored ways to be able to see these events in the people, streets, and places that we often pass by without much thought.

Stations of the Cross

From early Christianity, when pilgrims came to Jerusalem,
they visited sites where Jesus was known to have been. Eventually, following in the
footsteps of the Lord, along the way of the cross, became a part of the pilgrimage
visit. The traditional stations came about during the crusades, when it was no longer
safe to visit the holy sites. In the 1500’s, villages in Europe created “replicas” of the
way of the cross, commemorating the places along the route in Jerusalem.
They are presented here as an alternative to the traditional
stations and as a way of reflecting on the Scriptural accounts of Christ’s passion.
*** credit to “The Church of the Nativity” – Indianapolis, IN
image credits where available

Station 1: in the garden

Then Jesus came with them to a place called Gethsemane, and he said to his disciples, “Sit here while I go over there and pray.” He took along Peter and the two sons of Zebedee, and began to feel sorrow and distress. Then he said to them, “My soul is sorrowful even to death. Remain here and keep watch with me.” He advanced a little and fell prostrate in prayer, saying, “My Father, if it is possible, let this cup pass from me; yet, not as I will, but as you will.” When he returned to his disciples he found them asleep. He said to Peter, “So you could not keep watch with me for one hour? Watch and pray that you may not undergo the test. The spirit is willing, but the flesh is weak.”
Matthew 25:36-41
Prayer: Lord, grant us your strength and wisdom, that we may seek to follow your will in
all things

Station 2: Jesus is betrayed by Judas and arrested

Then, while [Jesus] was still speaking, Judas, one of the Twelve, arrived, accompanied by a crowd with swords and clubs, who had come from the chief priests, the scribes, and the elders. His betrayer had arranged a signal with them, saying, “the man I shall kiss is the one; arrest him and lead him away securely.” He came and immediately went over to him and said, “Rabbi.” And he kissed him. At this they laid hands on him and arrested him.
Mark 14: 43-46
Prayer: Lord, grant us the courage of our convictions that our lives may faithfully reflect
the good news you bring.

Station 3: Jesus is condemned by the Sanhedrin 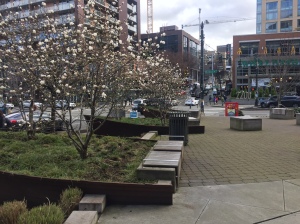 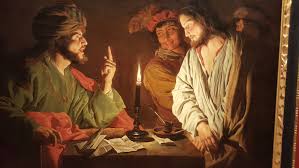 When day came the council of elders of the people met, both chief priests and scribes, and they brought him before their Sanhedrin. They said, “If you are the Messiah, tell us,” but he replied to them, “If I tell you, you will not believe, and if I
question, you will not respond. But from this time on the Son of Man will be seated at the right hand of the power of God.” They all asked, “Are you then the Son of God?” He replied to them, “You say that I am.” Then they said, “What further need have we for testimony? We have heard it from his own mouth.”
Luke 22: 66-71

Prayer:  Lord, grant us your sense of righteousness that we may never cease to work to bring about the justice of the kingdom that you promised.

(bottom of the steps next to Whole Foods) 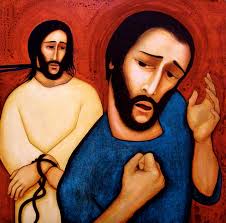 Now Peter was sitting outside in the courtyard. One of the maids came over to him and said, “You too were with Jesus the Galilean.” But he denied it in front of everyone, saying, “I do not know what you are talking about!” As he went out to the gate, another girl saw him and said to those who were there, “This man was with Jesus the Nazarene.” Again he denied it with an oath, “I do not know the man!” A little later the bystanders came over and said to Peter, “Surely you too are one of them; even your speech gives you away.” At that he began to curse and to swear, “I do not know the man.” And immediately a cock crowed. Then Peter remembered the word that
Jesus had spoken: “Before the cock crows you will deny me three times.” He went out and began to weep bitterly.
Matthew 26: 69-75

Prayer: Lord, grant us the gift of honesty that we may not fear to speak the truth even when difficult. 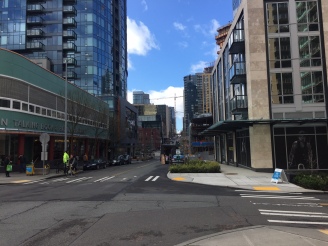 The chief priests with the elders and the scribes, that is, the whole Sanhedrin, held a council. They bound Jesus, led him away, and handed him over to Pilate. Pilate questioned him, “Are you the king of the Jews?” He said to him in reply, “You say so.” The chief priests accused him of many things. Again Pilate questioned him, “Have you no answer? See how many things they accuse you of.” Jesus gave him no further answer, so that Pilate was amazed…. Pilate, wishing to satisfy the crowd, released Barrabas… [and] handed [Jesus] over to be crucified.
Mark 15: 1-5, 15
Jessica Miller Kelley
Prayer:  Lord, grant us discernment that we may see as you see, not as the world sees.

Station 6: Jesus is scourged and crowned by thorns  (Lenora/Boren/Denny statue)

Then Pilate took Jesus and had him scourged. And the soldiers wove a crown out of thorns and placed it on his head, and clothed him in a purple cloak, and they came to him and said,”Hail, King of the Jews!” And they struck him repeatedly.
John 19:1-3
Prayer:  Lord, grant us patience in times of suffering that we may offer our lives as a sacrifice of praise.

When the chief priests and the guards saw [Jesus] they cried out, “Crucify him, crucify him!” Pilate said to them, “Take him yourselves and crucify him. I find no guilt in him.” … They cried out, “Take him away, take him away! Crucify him!” Pilate said to them, “Shall I crucify your king?” The chief priests answered, “We have no king but Caesar.” Then he handed him over to them to be crucified. So they took Jesus, and carrying the cross himself he went out to what is called the Place of the Skull, in Hebrew, Golgotha.
John 19: 6, 15-17
Jessica Miller Kelley
Prayer:  Lord, grant us strength of purpose that we may faithfully bear our crosses each day.

Station 8: Jesus is helped by Simon the Cyrenian to carry the cross  (Denny/Terry NE corner) 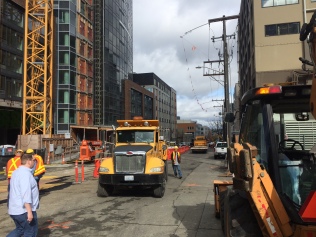 They pressed into service a passer-by, Simon, a Cyrenian, who was coming in from the country, the father of Alexander and Rufus, to carry his cross.
Mark 15: 21
Prayer:  Lord, grant us willing spirits that we may be your instruments on earth.

A large crowd of people followed Jesus, including many women who mourned and lamented him. Jesus turned to them and said, “Daughters of Jerusalem, do not weep for me; weep instead for yourselves and for your children, for indeed, the days are coming when people will say, ‘Blessed are the barren, the wombs that never bore and the breasts that never nursed.’ At that time, people will say to the mountains, ‘Fall
upon us!’ and to the hills, ‘Cover us!’ for if these things are done when the wood is green what will happen when it is dry?”
Luke 23: 27-31
Jessica Miller Kelley
Prayer: Lord, grant us gentle spirits that we may comfort those who mourn.

When they came to the place called the Skull, they crucified him and the criminals there, one on his right, the other on his left. [Then Jesus said, “Father, forgive them, they know not what they do.”]
Luke 23: 33-34
Prayer:  Lord, grant us merciful hearts that we may bring your reconciliation and forgiveness to all.

Station 11: Jesus promises his kingdom to a thief 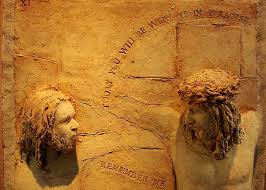 Now one of the criminals hanging there reviled Jesus, saying, “Are you not the Messiah? Save yourself and us.” The other, however, rebuking him, said in reply, “Have you no fear of God, for you are subject to the same condemnation? And indeed,
we have been condemned justly, for the sentence we received corresponds to our crimes, but this man has done nothing criminal.” Then he said, “Jesus, remember me when you come into your kingdom.” He replied to him, “Amen, I say to you, today you will be with me in Paradise.”
Luke 23: 39-43
Prayer: Lord, grant us perseverance that we may never stop seeking you.

Station 12: Jesus speaks to his mother and the disciple  (Harrison/9th NE corner bench) 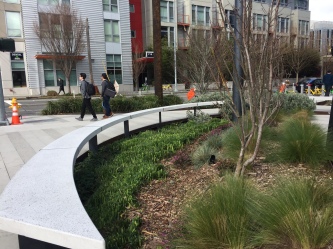 Station 13: death on the cross

It was now about noon and darkness came over the whole land until three in the afternoon because of an eclipse of the sun. Then the veil of the temple was torn down the middle. Jesus cried out in a loud voice, “Father, into your hands I commend my spirit”; and when he had said this he breathed his last.
Luke 23: 44-46
Prayer:  Lord, grant us trust in you that when our time on earth in ended our spirits may come to you without delay.

Station 14:  Jesus is placed in the tomb 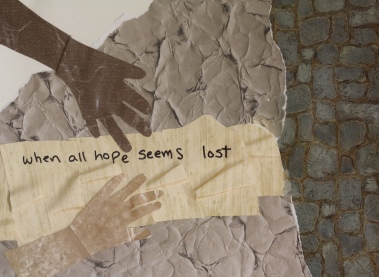 When it was evening, there came a rich man from Arimathea named Joseph, who was himself a disciple of Jesus. He went to Pilate and asked for the body of Jesus; then Pilate ordered it to be handed over. Taking the body, Joseph wrapped it [in] clean linen and laid it in his new tomb that he had hewn in the rock. Then he rolled a huge stone across the entrance to the tomb and departed.
Matthew 27: 57-60
Jessica Miller Kelley
Prayer: Lord, grant us your compassion that we may always provide for those in need.

Lord Jesus Christ, your passion and death is the sacrifice that unites earth and
heaven and reconciles all people to you. May we who have faithfully reflected on
these mysteries follow in your steps and so come to share your glory in heaven where
you live and reign with the Father and the Holy Spirit one God, for ever and ever.
Amen.