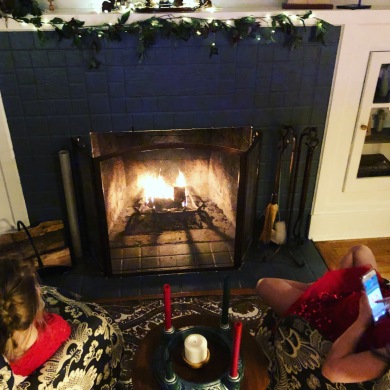 I will be the first to admit to having some irrational responses to random things.  For instance, if I am shopping for an item in the store and it doesn’t have a price tag, I refuse to buy it.  Once in a great while, if I’m in a store with a price check scanner in close proximity, and I’m desperate enough, I’ll consider purchasing it.  Otherwise I’ll walk away without giving it a second thought.  If I’m ignored when standing near a sign that says “please wait to be seated” I will most likely walk out.  I’ve been immersed in the pastoral arts for over two decades of my life where I’ve been ignored a good deal of it.  I don’t now feel the need to pay someone to ignore me.  One of the more serious issues I have really flairs up this time each year.  I’ll just call it the great fireplace deception.  This one can turn me from a sensitive, friendly, loyal, frequent and generous customer to a raging lunatic that, on my worst days, might even cause me to consider authoring a scathing Yelp review.

I’ll bet most of you have no idea what I’m referring to.  Here it is … the fireplace deception occurs, particularly in coffee shops … which I may or may not spend a good deal of time in … especially on a cold dreary day … which we’ve been known to have here in Seattle… when a beautiful fireplace … or even an ugly one for that matter, is left cold and dark.  My wife and I, as do many others, love a good fireplace.  It was a condition of our new place … and our last few for that matter. The first big renovation project undertaken in my current base of ministry took place in what’s known as the “Fireside Room”.  The centerpiece of the “Fireside Room” is, you guessed it … an enormous brand new beautiful fireplace.  This time of year, when I’m in that room, the fireplace is on … no questions asked.  I wish I could say the same about half of the coffee shops I’ve been to these past few years that have fireplaces.  More often than not, when I walk in, they are cold and dark.  On a day like today it’s not too big of a deal.  However, this past Saturday afternoon, rainy, cold, and windy, being home alone I decided it called for reading a book at my (formerly) favorite beachfront Starbucks.  Why there you ask?  Simple … they have this big beautiful fireplace that some poor architect went through great design detail only to have them decide that it is better served as a big black cold box than a nice warm glowing beacon of warmth.  Needless to say, but I’ll say it anyway, I did not linger.  If it were the first time, or even the second or third, I might be more level headed about it.  I’ve found, however, for this to be the rule and not the exception … place after place, the promise of warmth and comfort is countered by the reality of cold and dark.  Do they not realize that, if they merely had the fire going, I would single handedly provide them the economic means to pay for the fossil fuel that it requires.  I can have a fairly large carbon footprint. I cannot continually deal with the disappointment that comes from walking in with anticipation, only to have it dashed.  This was the last time I will step foot in there until next Spring … and later Spring at that.  I won’t continually put myself through that.

Here’s the thing I’m taking from this lately … for me it’s a fireplace … but for countless others it is the search for something more meaningful … something life giving … a lifeline to hold on to when life rages.  I sit with people every week who have at some point imagined it might be found in some sort of faith foundation.  Just this past week I sat in briefly on a discussion between 2 avowed card carrying skeptics.  Both shared with each other and with me what basis they have to evaluate various faith claims. Some of you who have never had this sort of conversation might be quick to write them off.   I found it both interesting and terrifying to note that much of their conclusions were based on historical faith claims compared to contemporary observations of how they were lived out. They were fairly well versed.  Unlike some who I know use this method, I was impressed by the thoughtfulness and respect that these two had for various faith claims.  In their observations I didn’t sense unreal expectations … just honest attempts at the pursuit.  I was also very interested in their ability to listen to each other and freely disagree respectfully and continue to dialogue. It’s a quality that I don’t see nearly enough of from my group, and as a matter of fact, neither do they. On that matter, all three of us agreed.  The last time I walked out of Starbucks, still annoyed by the cold dark and ultimately worthless fireplace, it occurred to me that this was the lens they viewed faith claims through.  Is the intended purpose being demonstrated? Are they more than claims or are they seen in actions?  Since then I can’t help but think of all of those who came in from the cold of isolation, frustration, disappointment, addiction, or just plain exhaustion, seeking what they imagined might be a source of warmth and comfort, only to find a dark and disappointing counterfeit to the abundant life they hear about but rarely see.  I wonder what their limits are?  For me I know that I can give up pretty quickly depending on how high I’ve set the bar.  Fortunately for me though, most of these have little significant value in the whole scheme of things.  I’ll just keep searching for a place that actually uses their fireplace.  I have that luxury.