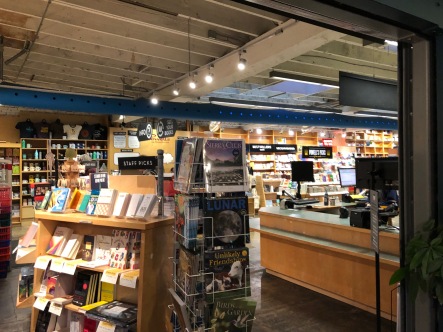 So I’m sitting in a coffee shop, located in Powells bookstore, on Hawthorne in Southeast Portland watching a barista concoct a soy chai latte… for those of you unaware, you don’t get much more authentically Portland than that.  Certainly not everyone would agree with me on this, but do you have any idea what it’s like to be in a place where people just are as they are … so many in fact that it threatens the very idea of authenticity.  It’s hard to be unique when so many are trying to be unique right alongside of you.  I love Portland because its so ….. well its so undeniably Portland.  People aren’t really into relevance … unless of course relevance is to seem totally irrelevant … and irreverent at the same time. For so many years my life in the pastoral arts has revolved around an illusion of relevance, authenticity and the pursuit at all costs to cover up anything that didn’t lend itself to that.  It’s a never ending and futile pursuit that makes these moments in Portland shine like a diamond on the backdrop of a velvet Elvis print.  It’s not everyone’s cup of Chai to be sure, but for me it’s fresh and welcome.

Are you familiar with the phrase “putting lipstick on a pig”,  It make not make any sense to you unless you witness it first hand.  According to Wikipedia, the source of all wisdom, the phrase  “is a rhetorical expression, used to convey the message that making superficial or cosmetic changes is a futile attempt to disguise the true nature of a product or person.”  I’ll give you an example … we’ve lived for the past two years next to a home owned by a slumlord and rented by 4 college guys.  For the two years of our proximity and countless year prior this property was allowed to deteriorate, complete with the mandatory blue tarp hopelessly tacked to the roof while water continues to pour through the ceiling in various places … a few months ago, without warning, work began on the house … or should I say around the house … as in some contractors were enclosing the yard with brand new wooden fence and gate … all the while the roof continues to act as the perfect catch all and conduit for every rainfall Seattle has experienced in recent years … yes this is Seattle.  I saw one of our college age neighbors outside while this was going on and asked him what was up … his response was, and I quote, “putting lipstick on a pig”.  In other words … a futile attempt to distract from the reality of what was going on inside the house.

I’ve been reflecting a great deal on this lately.  My wife and I have had numerous debrief sessions on our years in a culture where it wasn’t uncommon to go to great lengths to create an appearance that distracted from the reality of what was going on inside local congregations … including our own.  I can go back mentally through the years pursuing church growth and church planting … denying the real issues while putting lipstick on the places that we were trying to be relevant in … thinking that we needed to make it beautiful, not realizing that, as a pig, it was quite beautiful on its own. In fact, people like pigs … don’t believe me, just head over to your State Fair.  For years I was a slave to the lipstick. I was embarrassed by the flaws … I wanted us to look like we knew what we were doing.  I bought all of the latest in ministry related lipstick and went to all of the best conferences to learn how to apply it … so that no one would know our church for what it really was.  Freedom has finally come, I am hoping and praying, with the realization sometimes its just a pig … and there is indeed beauty in that.

So much energy is wasted on making sure that we have the coolest (fill in the blank).  Countless millions are spent on creating theme park environments that attract families with school age children because they provide stability and income and energy while volunteers flow through like the Niagara River over the precipice of exhaustion and discouragement and families are being crushed under the weight of expectation and over-commitment.  Sometimes its just a pig.  Brilliant sermon series are formulated on the 7 steps to successful and faithful living for people who come crawling in the doors, not sure if they can endure one more broken promise, relationship failure, or financial hurdle.  Sometimes its just a pig.  We recruit worship bands who look and dress a certain way “that reflects the culture” when many they are called to lead can’t even begin to imagine the glorious doubt free lives that their smiling faces convey.  Sometimes, it’s just a pig.   Discipleship is marketed as a Sunday attendance carrot without the cost of “sitting in the dust of the master”.  Sometimes its just a pig.  The irony here is that, in our sincere desire to follow Jesus, we seek to put lipstick on all of the broken and imperfect parts of the journey … all the while his mission is to relentlessly reveal the natural beauty in the pig,

If I thought that this was all some nefarious evil plot, I’d be angry.  If I thought it was all a devious ploy by the Christian marketing machine to gain market share in spiritual cosmetics I’d be angry.  I don’t believe that at all.  I think its a mix of Western marketing, honest yearning for the best, and Satan’s brilliant distraction.  I think this because it has been and still too often is me.  As it is, I’m just sad.  I’m sad for my part.  I’m sad when I fall into it.  I’m sad for those who are left behind on the makeup counter of “our best”.  I’m sad when I don’t always remember that, as embarrassing as it can be, and as counter intuitive to “success” as it may seem, underneath it all … the church was only ever really a pig… and that in fact as such, it’s quite beautiful.

One thought on “Sometimes it’s just a pig”