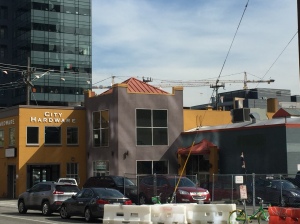 The face of my neighborhood changes every single day.  From nearly any vantage point, at least one that is not obscured by the dozens of new buildings already erected, you could count up to a dozen cranes towering over their own personal piles of concrete and steel.  There is a daily shell game of which streets will rerouted and which sidewalks closed.  The population is fairly evenly split between badged tech workers and helmeted construction crews.  Change is the only thing that doesn’t change here. The roughly 8 x8 square blocks that constitute our place is nearly unrecognizable from when we moved in merely 5 years ago.  The identity it had when we moved to Seattle 18 years ago is now all but erased.  With a residential neighborhood comprised predominantly of people who will call this home for an average barely over 2 years, we are some of the “old guard”.  On every block that hasn’t already been developed are posted land use signs that promise the imminent arrival of another crane and another identity.  I will confess that early on in our time here I was obsessed with those signs and answering the question “what will this space become?”.  I became a knowledgeable guide easily able to identify the destiny of each site. For the most part, the spaces in question were long abandoned warehouses.  It rarely occurred to me to consider what these spaces had been or to try and understand how their history had shaped the neighborhood.  I didn’t consider it gentrification because, as far as I could tell, people were not being displaced … it was simply the rebirth and repurposing of buildings that had long surpassed their usefulness.  I didn’t take into account the gentrification of its culture … which certainly has human element.

My attitude changed the day I walked in to the neighborhood hardware store which we had become attached, only to discover the all too familiar sign of an impending closing sale.  I’ve seen hundreds of these signs in the course of my lifetime … usually in a suburban strip mall context … and always treated them with an “easy come, easy go” attitude, usually accompanied by calculating how much I, as the entitled consumer, might save on their demise.  This was different though … this wasn’t in the context of an undefined and easily commutable strip mall.  This place had a purpose.  This neighborhood had boundaries and a walk score and I was a walker.  They were not moving to a better location … they were not going to be replaced … a valuable piece of our lives was now being replaced by something not really of much value to me.  This time it was personal.  It changed my perception.  It changed my question.  No longer was I nearly as interested in what was coming as I was in what was being replaced.  “What is the history here” became my question? Who were the characters?  What was their intent?  How did it shape the face of the neighborhood and what were the signs of God working in the midst of it? It has informed my ministry to the present.

This ministry is  based out of a historic congregation’s building on one of the last undeveloped plots in the neighborhood.  It could very easily be sold for 8 figures in the current market, still inflating by the day.  What keeps it off the market, at ground zero in one of the most lucrative and transitional neighborhoods in the country, is the knowledge that in 5 years it’s memory would have been wiped from the neighborhood with nearly everything else here.  It was begun with a purpose and a dream to establish a place that would bring light and life through Christ.  It continues into the future story of this place with it’s history firmly in mind.