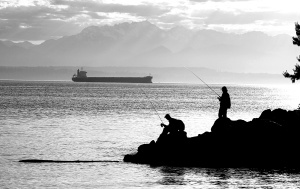 I’m old enough to have accumulated a great deal of baggage associated with the term missionary.  I remember when it carried with it imagery of the super faithful, those who traveled where most dared not, ate things that most dared not and wrestled with cultures that most had only read about.  During my undergraduate years, preparing for local ministry and taking the required (token?) missions class, I’ll confess to having illusions of green and jungle and oppressive heat.  On occasion I remember some alluding to the day when missions would come to us in the form of our own US urban contexts.  Even then I related it primarily to working with a specific ethnicity who happened to concentrate in one of our cities.  One of my earliest urban neighborhood experiences was working with recently transplanted Vietnamese families settling in to a particular neighborhood in a particular East Coast city.  In the midst of my short time working with them, I completely missed all of their urban neighbors who were not of Vietnamese descent … as if they were just an audience watching the drama that I was participating in.  I was so entangled in the baggage of my own limited view that I continued to view missions as something that only the hyper spiritual were capable of and I could maybe dip my toe into occasionally, only to later retreat safely back to my burgers and fries.  Having confessed my ignorance, I could offer to you that this was no big deal because it is only an anomaly in Christian belief and practice.  I could offer this, however I am fairly certain my story is more the rule than the exception.

What I’ve come to understand over these many years of faith, following Jesus, and ministry is that the call to missions is not for a select few who are either braver than most or the socially challenged who don’t fit in here anyway.  When Jesus first promised “Follow me and I will make you fishers of men” it was a call to mission.  It wasn’t a call to watch mission. It wasn’t a call to a fly in fishing excursion to Alaska.   It wasn’t a call to a 2 week or some other version of a “short term” mission in some other culture that you can come back from and check off on your “feel good about God” chart.  It is a call to do and be, live and breathe, right in the place that you are… to learn the waters of your place.  To take part in the rhythms, cycles, and celebrations of your place.  The beauty of this is that it has no boundaries.  Whether you are urban, rural, suburban, foreign, or domestic … you are in a place where people are hungry for good news… and you don’t need me to come in and tell you how.  I’d be happy to join you, to come alongside and learn from you, but you are the experts in your place.  You are the missionaries in your own culture that, even if its only 5 miles away, it is still foreign to me.

For most of my ministry, my context has ironically been urban.  Until we moved here I had no idea that missions could also be to mostly white middle class people.  In recent years I have come to understand that missions is also to affluent young tech workers.  I am reminded daily of the obvious need of the urban poor, homeless, and addicted.  I had never considered though what it might mean to live with all of these in your same block.  I have learned that the need is not for more churches but for more missionaries.  This might seem heretical for a pastor but the reality is a church is also a comfortable place to hide and to avoid mission.  You can’t fish from a building … not sure whether you realized this or not but when Jesus made that promise, he was making it to individuals who knew that fishing meant being where the fish were … in or on the water, casting nets by hand.

A few weeks ago I was invited to a large gathering celebrating the culmination of a lengthy prayer focus for the city that I call home.  I am not going to name it or those taking part because I so much appreciate their heart in this … do we need prayer?  Absolutely!  I am grateful for their concern and the enormous time and energy invested.  Here’s the thing though, it was initiated, influenced and led by large (mega?) churches that are in no way shape or form city churches.  The only reason I even knew about it was because they had asked to hold their celebration in the church building that we lease space from.  The only “city” churches that were even represented were the 3 congregations that happen to meet in our building.  Otherwise it was all people from far outside in the burbs.  I’m not blaming the misrepresentation on their efforts, I don’t know if they made any.  My view of how we view missions and our reluctance to own our own missionary status was driven home that evening though by the language, the uninformed prayers, and even the fact that they came “in” to the city, some on their church buses, only to retreat back out as quickly as they came in.  Admittedly, their experience in our city is to enjoy the “fantastic restaurants” and walking by our homeless individuals.

What would I rather they have done?  What do I hope that, prayerfully, I will do someday in the same situation?  Walk the streets with us … ask those of us here about what are specific and pointed prayer needs … offer to learn from us and appreciate that these are waters that we are familiar with … this is our mission field … and when it is done, set about as missionaries in the waters of your place … get the people out of your buildings and casting their nets.  We are all missionaries … reluctant yes, but still missionaries.